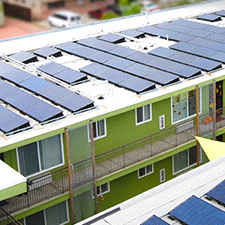 In its Zero Net Energy Roadmap for Local Governments, the Center for Sustainable Energy describes nine policies local jurisdictions can implement to prepare their local market for California’s rapidly approaching ZNE mandates for residential, commercial and state buildings. The first policy recommendation is to set ZNE goals at the local level.

In 2011, the City of Lancaster set a goal to become the first net-zero energy city, defined as producing or procuring more electricity within city limits from renewable sources than is consumed.

“Net-zero is possible, net-zero is cost-effective and net-zero is necessary to maintain the wellness of our planet.”
– Mayor R. Rex Parris

The driving force behind Lancaster’s ZNE goal was the vision of Mayor R. Rex Parris and the city council and their passion for cost-effective climate change solutions. The goal has two phases: first to reach 215 megawatts (MW) of renewable power capacity, then 530 MW. City leaders initially focused on solar programs and have since evolved into a more holistic look at energy, including efficiency and storage.

Lancaster’s ZNE goal set a clear vision for city council, staff and the public. It brought structure and focus to the various sustainable energy initiatives under way and helped the city evaluate projects and programs using the loading order.

By the end of 2014, the city was 54% of the way to achieving its phase one goal, with 117 MW of solar production operational or under construction. The city’s suite of policies and programs supporting the ZNE goal has brought financial benefits to taxpayers, schools and individual families. Following are some of these initiatives.

The community, which is largely politically conservative and centered on the agriculture and aerospace industries, has been generally supportive of the city’s ZNE efforts. The initiatives have led to cost savings and jobs for constituents; many were developed with the input of builders and developers.

Lancaster officials recognize that an opportunity for improvement would have been to incorporate energy efficiency strategies from the onset. Lancaster focused much of its early attention on solar without considering the loading order. The result has been overproduction at some facilities and potential missed opportunities for a more cost-effective approach.

The most important lesson from Lancaster’s example is the importance of strong internal leadership. The mayor and city council were willing to take calculated risks and try creative solutions, and it is paying off in cost savings, job creation and huge advancements in the production of clean, renewable energy.