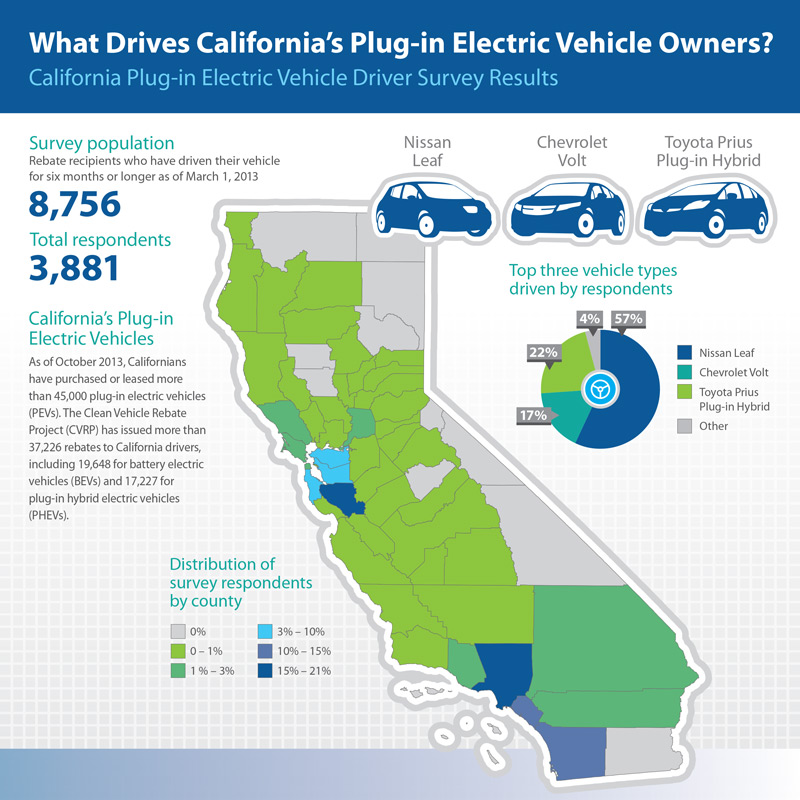 The latest survey of California’s plug-in electric vehicle (PEV) drivers shows differences in primary purchase motivations from owners of one model to the next. The survey also shows increased satisfaction with public charging options and wider availability of workplace charging than in previous surveys.

With more than 3,500 responses in this round alone, the study is the largest and most comprehensive survey of PEV drivers in the nation, supplying details on demographics, purchasing motivations, charging behavior and access to public and residential charging. An infographic of the survey results is available here.

The current survey results cover owners who have owned their PEV for at least six months as of March 1, 2013. PEVs include battery electric vehicles (BEVs) that run exclusively on battery power and plug-in hybrid electric vehicles (PHEVs) that combine a gas-powered engine with an electric motor.

Participation in previous rounds of the CCSE survey consisted largely of all-electric Nissan Leaf drivers. The latest survey is the first time drivers of multiple vehicle types have participated. The majority of respondents own one of the following vehicles— 57% of participants own a Leaf (BEV), 17% own a Chevrolet Volt (PHEV) and 22% own a Toyota Prius Plug-in (PHEV).

As of January 15, 2014, more than 46,500 Californians have purchased or leased PEVs and applied for rebates from the CVRP. California is the nation’s largest PEV market with more than 63,000 vehicles, roughly 35 percent of the U.S. total, with sales adding in excess of 3,000 additional cars in the state each month.

“The plug-in electric vehicle market share has continued to accelerate,” said Colin Santulli, CCSE’s senior manager of transportation programs. “Continuing to explore and understand this market is more vital than ever.”

Highlights from the survey

Future surveys and other resources

This is the third and final report produced from the CRVP PEV Driver Survey. Future survey results will be available via a regularly updated interactive online dashboard covering a variety of research areas. The dashboard, due to be launched in the spring, will provide researchers and other PEV stakeholders faster access to the most up-to-date PEV market data, according to Santulli.

CCSE also offers an online map depicting region-specific PEV adoption rates based on the number of rebates issued by ZIP code and the type of PEV purchased. The map is available at www.energycenter.org/CVRPRebateMap.

A leader in electric and alternative fuel transportation planning and programs in California, CCSE has issued more than $98.7 million in incentives and helped to educate hundreds of thousands of Californians on the availability and benefits of zero-emission vehicles since the rebate project’s inception in 2010.