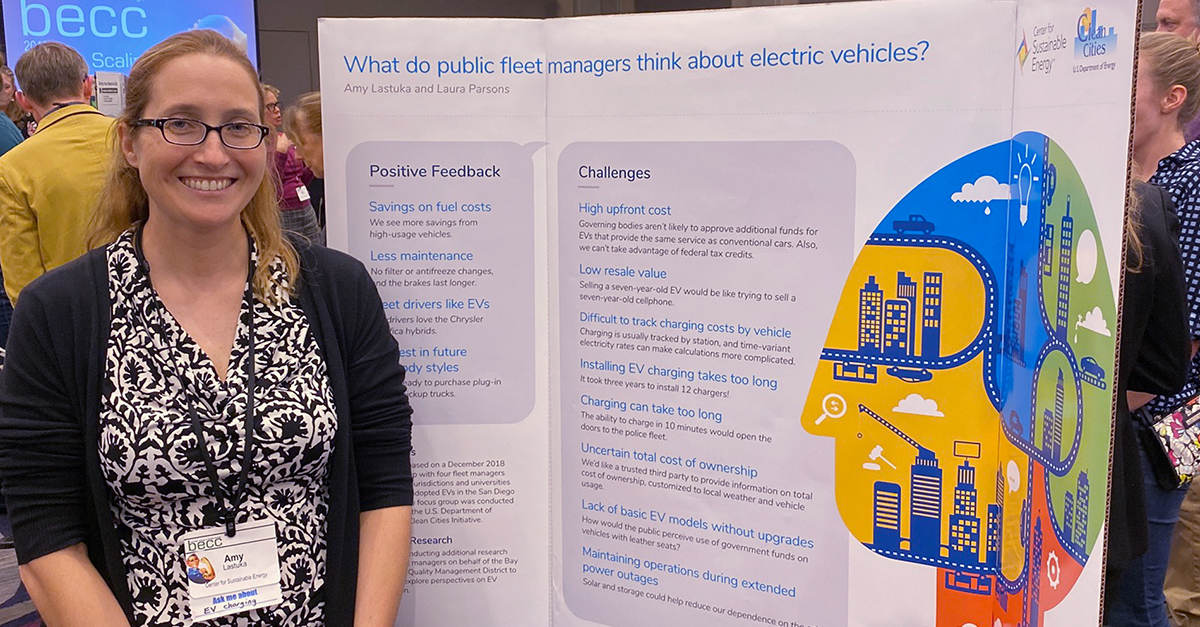 CSE thought leaders presented on cutting-edge research addressing aspects of electric vehicle adoption and residential energy use at the 2019 Behavior, Energy & Climate Change Conference held in November in Sacramento. It is the leading U.S. conference focused on how the behavior and decision-making of individuals and organizations affects the nation’s transition to an energy-efficient and low-carbon future.

What vehicles are EVs replacing and why?

Reporting on the types of cars that electric vehicles (EVs) are replacing in California, Massachusetts, Connecticut and New York, clean transportation experts Nicholas Pallonetti and Brett Williams presented findings representing over 300,000 EV consumers who received rebates from the statewide programs administered by CSE, with an emphasis on California’s Clean Vehicle Rebate Project (CVRP). Began in 2010 and implemented by CSE for the California Air Resources Board, CVRP has awarded more than $809 million for over 350,000 new EVs.

The researchers found that across all four states more than 75% of rebate recipients from 2013–18 made a one-for-one replacement of an older car when they purchased or leased a new EV. In California, that percentage has increased from 65% doing so in 2013–15 to 82% in 2017–18. This trend supports related research indicating the increasing importance of EV incentives, running counter to the common assumption that it is time to start phasing out support, according to Williams.

Further, two-thirds of vehicles replaced were conventional gasoline or diesel vehicles, and over half were six years old or more. Indeed, consistently over time, a quarter of vehicles replaced were over 12 years old. A variety of factors motivating vehicle replacement were examined, with financial motivations, such as incentives or appealing prices or lease rates, found to be of particular and growing importance to consumers of all-battery EVs, Williams said.

In a presentation given by Jennifer Boughton, in collaboration with James Tamerius, she examined consumer “clusters” based on the demographic characteristics of CVRP participants with low to moderate incomes eligible for the program’s Increased Rebates. Looking at the age, education, income, household size and race/ethnicity of this population, the results indicated they fall into four distinct categories of consumers (in descending order by size): older/white, middle-aged/white, younger/Asian American and younger/Latino.

Among the differences noted are that the oldest group is primarily motivated to acquire an EV based on positive environmental impacts, while the main motivation for the younger Latino cluster, is saving money on fueling costs. Boughton said that better understanding these clusters will inform targeted marketing strategies aimed at in increase participation in CVRP by low-to-moderate income consumers.

With increasing state and regional targets to reduce carbon emissions, EV adoption by fleet operators, particularly among public agencies and government organizations, is on the rise. CSE Research Analyst Amy Lastuka presented a poster outlining findings based on focus group responses of fleet managers from jurisdictions and universities in the San Diego region that have adopted EVs.

The responding fleet managers expressed positive feedback about their EV experiences, citing savings on fuel, less maintenance and fleet driver satisfaction. However, they also reported many challenges, ranging from high upfront costs and low resale value to difficulties tracking fueling costs and uncertain total cost of ownership. Another major obstacle is the absence of light-duty EV trucks and vans, according to Lastuka.

Lastuka also spoke about the motivations and decision-making processes of property owners who install electric vehicle charging equipment and the perspectives of equipment providers and manufacturers. She focused on participants in the California Electric Vehicle Infrastructure Project (CALeVIP), a program administered by CSE that provides rebates for installing public EV charging to businesses, multifamily residences and others eligible organizations.

In interviews with charging site hosts, she found many started the process with little knowledge of EV infrastructure or the costs involved. Service providers commented that although CALeVIP supplies information to help them install equipment, more details are needed to better understand underlying issues, such as code compliance, project sizing and unexpected costs.

As a result, CALeVIP is revising its marketing materials to provide both an advanced path for those who are looking for specific information and a beginners path that step by step walks through the installation process.

The study enlisted 100 homes, with solar panels and one or more electric vehicles, and installed a battery storage system (if one did not already exist at the home). Sophisticated control and monitoring devices were added to form a web-connected hub, creating a “residential energy resource management system” capable of communicating with the electrical grid and controlling certain home energy devices.

Using a variety of existing and potential retail utility rates, the research evaluated the greatest and least energy cost-savings based on the home’s electrical consumption, the performance of its energy resources and utility rates. They also evaluated how such systems in millions of homes could contribute to overall grid reliability and help meet renewable energy goals.

What Vehicles Are Electric Vehicles Replacing and Why?

What Low/Moderate Income Populations Are Adopting Electric Vehicles in California?

What Do Public Fleet Managers Think About Electric Vehicles?