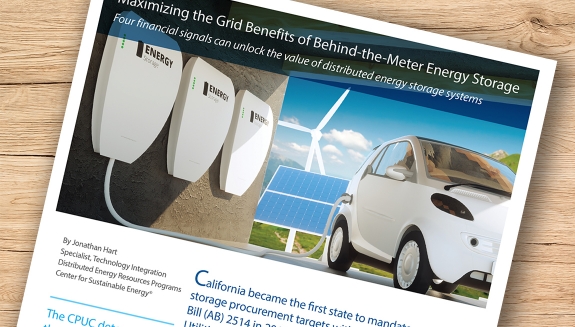 California’s Self-Generation Incentive Program (SGIP) is the nation’s longest running incentive program to support existing, new and emerging distributed energy resources (DERs). The SGIP provides incentives for qualifying DER systems installed on the customer’s side of the utility meter (behind-the-meter). Two primary goals of the program are to reduce peak demand and greenhouse gas (GHG) emissions. Each year, the SGIP conducts an impact evaluation report of the performance of projects in accomplishing program goals. The most recent report for 2014-15 (released late 2016) found that certain energy storage systems funded through the program had increased both GHG emissions and peak demand in the state, thus indicating that energy storage systems overall did not accomplish the SGIP goals during the evaluated period. While various data methodologies and analyses might yield different results, this evaluation raises important questions that must be answered if behind-the-meter storage is to provide maximum benefits. This paper specifically addresses why behind-the-meter storage systems might not operate in ways that are beneficial to the grid and what policy reforms are needed and most integral to maximize their value to both customers and the grid.